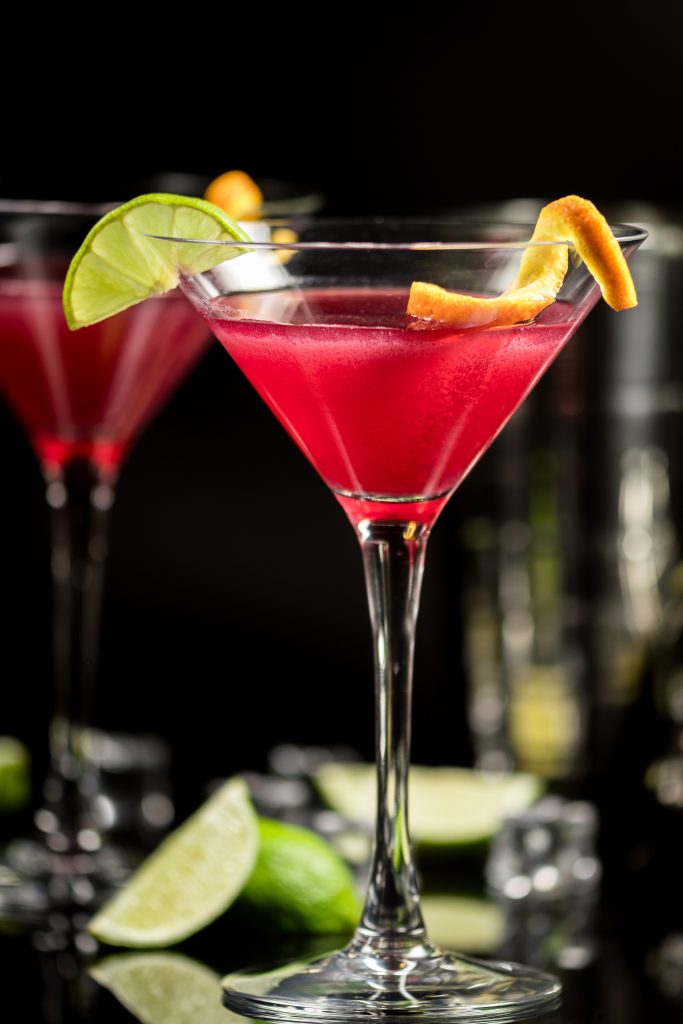 The stylish light pink Cosmopolitan, served in a martini glass with a twist of lemon, was a staple of the 90s. The perfect cocktail for “drinks with the girls” – Cosmos are often constructed using Cointreau, fresh lime juice, citrus-flavored vodka, and cranberry juice.

The History Behind The Cosmo

Most people associate Cosmos with Carrie Bradshaw, a character from the show “Sex And The City”, who was known to sip the pink-tinged cocktail with her girlfriends in nearly every episode. However, the Cosmopolitan as we know it has been around since the 80s and is a variation of a cocktail by a similar name.

In fact, in the 1960s Ocean Spray Cranberry Juice Cocktail used to feature cocktail recipes on their bottles, and a shockingly similar drink called the Harpoon was often featured. Even before that, there were variations stemming as far back as the 1920s with drinks such as the Daisy Cosmopolitan.

How To Make A Cosmopolitan Cocktail

Gather ingredients and add to a cocktail shaker with ice. Shake vigorously and then strain into a chilled cocktail glass. Finally, garnish with an orange peel twist or lemon twist to really accentuate the citrus flavors of the drink.

Did The Modern Cosmo Come From Miami?

Many bartenders and cocktail historians credit the original Cosmopolitan to Cheryl Cook, a bartender located in Miami in the 80s. She was known throughout the town as The Martini Queen Of South Beach and the popularity of the Cosmo is thought to be her doing. She wanted to create a martini that was both palatable and appealing to her female patrons. The Martini Queen used the newly available Absolut Citron with its fresh citrusy flavor, along with Rose’s lime, triple sec, and cranberry juice.

But Then Again Maybe Not…

Many versions of the creation of the Cosmopolitan exist and you’ll find a variety of apocryphal stories from different historians across the nation. In one account, Dale “King Cocktail” DeGroff first tried the drink at a bar in San Francisco before adding his own twist to it in New York City using Cointreau, fresh lime juice, and a flamed orange peel.

Defying all belief – there is a whiskey Cosmo variation that has made the rounds with varying degrees of popularity over the years. Made with Scotch whisky, Irish whiskey, Swedish punch, vodka, Italian vermouth, French vermouth, and a lemon twist this version is known to knock drinkers to the ground. In fact, the original recipe included the instruction to “send the corpse to the League of Nations.”

If you keep reaching back into the annals of cocktail history you will find perhaps the earliest incantation of the Cosmopolitan Cocktail. Appearing by the name of the Cosmopolitan Daisy in the Pioneers Of Mixing At Elite Bars 1903-1933 edition, this drink consisted of Gin, Cointreau, lemon juice, and raspberry syrup.

The deliciously fresh and botanical taste of the 1934 Cosmo is an absolute treat. Very similar to its more modern counterpart, this cocktail is known for being the first iteration of the drink we have all known and loved for decades.

Add all ingredients to a cocktail shaker with ice and shake vigorously. Strain the tasty mixture into a chilled cocktail glass. Finally, garnish the beverage with a fragrant orange peel for the perfect look. This light pink concoction is both simple to make, and beautiful.

What Vodka Is Right For Your Cosmopolitan?

The International Bar Association (IBA) approved cocktail recipe appears to have been inspired by Dale Degroff’s popular mid-1990’s version using citrus-flavored vodka as the base for the cocktail. Despite this fact, many bartenders choose to use a standard unflavored vodka and add additional citrus juice, whether lemon or lime, to the drink.

Interestingly enough, this alternative recipe is likely far more historically accurate than the approved version. This recipe would more closely resemble those found in Ohio, Provincetown, or Minneapolis during the 1970s, or in San Francisco during the 1980s. In this alternative recipe, bartenders will also add a lemon twist to the cocktail to add an additional citrus kick.

Which Juice is Better – Fresh Lime Or Fresh Lemon?

The answer to this question is as simple as it is to make the drink itself. Whichever of these two juices you prefer will make the best drink for you to enjoy. This kind of cocktail has been added to, remade, twisted, and reinvented so many times that variation is just part of the fun. We support experimenting at your home bar and finding the perfect ratio of ingredients that make your taste buds happy.

Premium Cocktails Delivered To Your Door

Cocktails with TalkTales offers high-quality craft cocktail boxes delivered right to your door. Each box contains all of the ingredients you will need to construct the perfect craft cocktail. Check out our cocktail boxes page or reach out today to plan your virtual happy hour!